We are pleased to present the final reports of the Independent Governance Reform Commission and the Independent Resource Allocation Commission for your consideration and deliberation. We are grateful for your responses from the two rounds of survey we conducted and the many thoughtful comments and suggestions we received throughout the extensive process of consultation.

The Commission members worked hard to prepare reports that respond to our mandate to propose a radical reform of IPPF's approaches to governance and resource allocation. At the same time, we listened carefully and took very seriously the criticisms and concerns many of you expressed along the way.

We realize that we will not please everyone in every aspect of what we propose. However we hope you will appreciate we have tried hard and done our best to be fair and judicious, while at the same time proposing challenging new approaches that we believe will be in the Federation’s best interests.

We look forward to seeing many of you in New Delhi at the end of next month and hearing your reactions to our proposals.

The Commissions undertook an extensive consultation between June to October, including:

Why such a short timetable for change?

Many of you asked why the reform process is being conducted so quickly.
This is due to:

In recommending a revised system of governance the Commission considered:

Many of you asked why the reform process is being conducted so quickly.

This is due to:

The commission recommends a streamlined model, with a General Assembly and Board of Trustees, including:

The proposal intends to better support MAs, which is essential to the movement’s success, while ensuring a more effective and efficient delivery of the Federation’s purpose worldwide.

The Commission believes that the result will be a quantum leap forward in IPPF's ability to fulfil its mission and its goals. 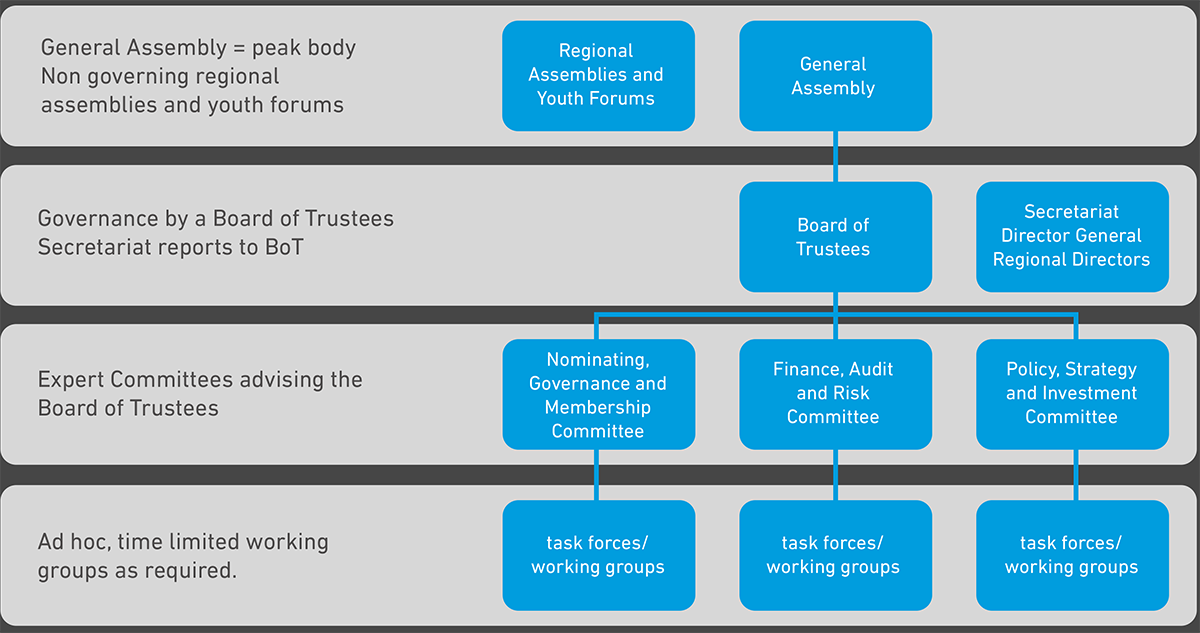 The Commission also recommends that regular Regional Assemblies and Youth Forums be held. These would not be part of the governance function.

The current formula-based allocation of unrestricted income has remained relatively unchanged since it was first introduced in 1997.

The current allocation approach is not well understood, it is not uniformly applied in the regions and there are serious concerns about the transparency of decision making. The broad opinion is that the resource allocation model is no longer fit for purpose. In the opinion of the Commission, there is little evidence that the current formula provides the best and most strategic use of the restricted funds available to the Federation.

The most substantive change being proposed is that unrestricted funding will move from a simple formula based allocation to a more flexible stream-based allocation model. It will be a mixed model applying a combination of formula and proposal-based approaches. The Commission recommends the introduction of a model which allocates unrestricted resources through three streams:

Stream 1 will account for at least 80% of total unrestricted funding, and will support MAs and Collaborative Partners in low to upper middle income countries to deliver their core SRHR role (SRH services, CSE, advocacy). It will also fund the core functions of the Secretariat to enable them to support MAs. Grants to MAs will be allocated through a transparent formula with a focus on unmet SRHR needs. The funds will be awarded against 3-year plans and approved allocations, offering both predictability and transparency.

Stream 2 is a Strategic Fund, which will provide funds on a competitive, proposal basis to all MAs. And Collaborative Partners. It will focus on areas of the strategy that require additional support, for example to deal with barriers such as opposition attacks, detrimental legislation or research. It will also be for innovations that can be replicated and that will help IPPF deliver on its strategy.

Stream 3 will provide funds for resilience, emergency preparedness and initial emergency response. It will be accessible to all MAs and Collaborative Partners. 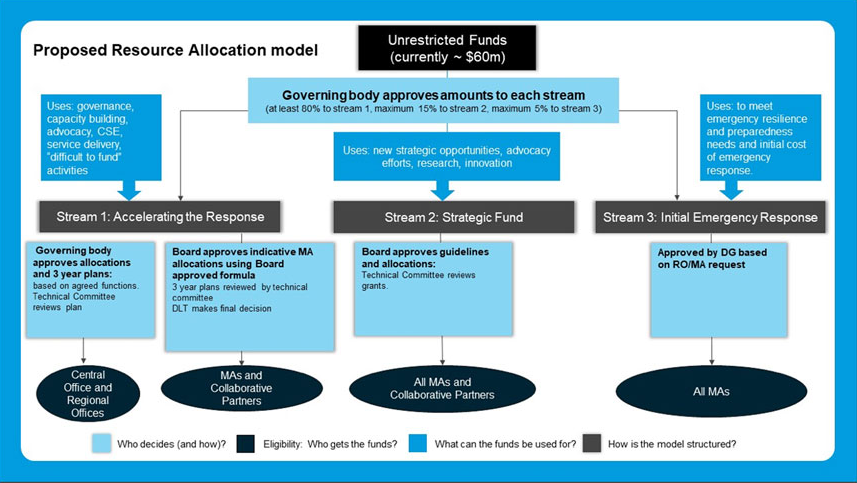 Benefits of the Model

It is the opinion of the Commission that the proposed model will improve efficiency and accelerate progress towards IPPF's strategic objectives through:

Better targeting of unrestricted funding to areas most in need through a mixed formula and proposal-based approach, and a focus on services and other roles like comprehensive sexuality education (CSE) and advocacy that are "difficult to fund".

Greater MA-centricity: Member Associations are at the heart of the proposed RA model, and building their capacity to ensure “no one is left behind” is a key element.

More transparency in financing the Secretariat: clarity around resource allocations to the Secretariat, whose role as enablers of MAs will be clarified and strengthened.

Stronger results focus across the Federation: a more comprehensive performance-based funding approach, with a wider range of key performance indicators that will measure contributions to IPPF’s mission.

Positive culture changes: unrestricted funding will be planned and budgeted for, ensuring that both MAs and the Secretariat are more strategic and aligned with each other; Member Associations, Regional Offices and Central Office (CO) will all submit plans, in a more equitable approach to resource allocation and a more collaborative approach to delivery.

Ongoing relevance: the model will be agile and dynamic, through regular reviews and modifications.